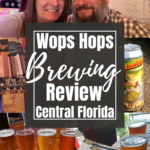 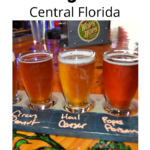 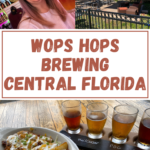 My intention with our brewery reviews was to share about them after our first visits to give honest thoughts, and first impressions. I feel it’s harder to share that initial visit, once we’ve been back a couple times. But for some reason, our first time to Wops Hops Brewing stands out. Actually, probably several reasons. And, we’ve been back many, many times. Therefore, our Wops Hops Brewing review will be some about our first visit, and a little about what else we’ve tried on our return visits.

Where is Wops Hops Brewing located?

Wops Hops Brewing is located in historic Downtown Sanford, in what’s considered the Georgetown neighborhood, toward the east end of downtown. You can find them in the former home of the Stokes’ Seafood Market. A business that occupied the building from 1938 to 1992. They even kept the historic logo painting of the market, on the building, and restored it.

You will find both indoor and outdoor seating, along with a fenced in large patio. Plenty of room for bigger groups and get togethers. We stopped here with lots of friends on my 50th birthday back in 2021.

During our first time at Wops Hops Brewing, I ordered a flight, that included a Nitro Peach Ale, Circus Peanut Hefeweizen, Hail Caesar – a lemongrass blonde, and Popes Poison – chamomile, honey, vanilla, cinnamon. I enjoyed them all, which rarely ever happens. The biggest surprise was the Circus Peanut one. I expected it to be much sweeter than it was, and it smelled just like them.

I’m a big coconut fan, and they had a coconut ale I was very hesitant to try. It just sounded like a very strange combo, even though I should know better by now. Finally, the beertender coaxed me to at least taste it. Then, Paridiso has been my number one, favorite beer.

Matt mostly drank Sleeping with the Fishes, an English Pub ESB the first time we went. The beertender, Ben, kept (kindly) trying to persuade him to try the Smokin’ Hot Italian, so he finally tried it. And ended up loving it. Now he hopes they have it every time we go. Again, another we didn’t think sounded like it could taste good, but was great! I even like it. It’s not hot pepper spicy, but just a smokey pepper flavor with hints of Italian herbs. An excellent mix of flavor.

How they got started

Wops Hops Brewing was Sanford’s first microbrewery, opening in October of 2014. Greg began home brewing back in 2008. Over the next couple years, he brewed for his family, and entered into some home brew festivals, winning many medals. Retiring from law enforcement in January 2014, he followed his dream of opening his own brewery. Joining forces with his friend Peter, they decided on Downtown Sanford, who was happy to have them.

With quite a loyal following, including us, they have expanded a couple times, and working on future long term growth. Greg has been around multiple times we’ve been there. He’s always very friendly, and asks how we are. It shows he loves what he does, and connecting with fellow beer lovers.

Yes, Wops Hops does serve food, We’ve only ever had snackable appetizers, but if they’re regular menu is anything like these, it’s got to be good. Plus we’ve seen some of the other food come out when we’ve been there, and it smelled wonderful.

Events at the Brewery

Along with great food, Wops Hops Brewing often has live entertainment, including a monthly comedy night. Be sure to follow them on social media for up to date information on their events.

Not only are they pet friendly, but they have a doggie section on their menu which includes a “ dog safe beer” and homemade snacks. With a large outdoor seating area, it allows for dogs to be in a more comfortable atmosphere.

Can you get beer to go?

Most certainly you can get beer to go. They do sell some pre-packaged beer now, including my favorite Paradiso. I got to take some to family this past summer. It was perfect for our kayaking trip. Crowlers and growlers can also be filled with beers on tap.

You can visit Wops Hops any day of the week.

With Paradiso being one of my favorites, we’ve gone back many times, and tried plenty of their beers. It’s one of few breweries, with multiple beers to top both our lists of favorites. So I think that says a lot. With Greg a former law enforcement officer, you can even buy a beer for a veteran or first responder. Finally, Wops Hops Brewing is a must if you are visiting Downtown Sanford. Cheers, and we hope our Wops Hops Brewing review is helpful.

If you’re spending the day in Downtown Sanford, or doing some brewery hopping, Sanford Brewing Company is right across the street from Wops Hops Brewing. Check out our full review:

We’ve also done day trips that included Central 28 Beer Company. You can read our full write up about them too.

Not too far from Sanford is Historic Deland, and home to the original Persimmon Hollow Brewing. Another one of our Central Florida favorites. Be sure to read all about it. 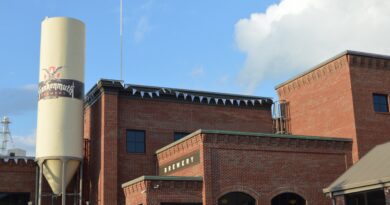 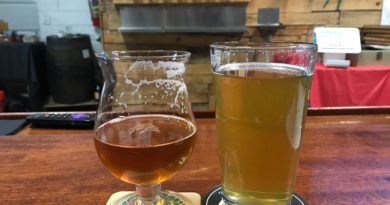 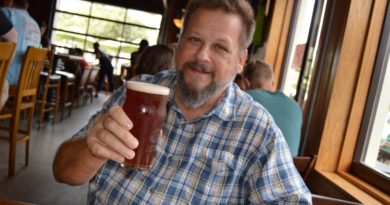