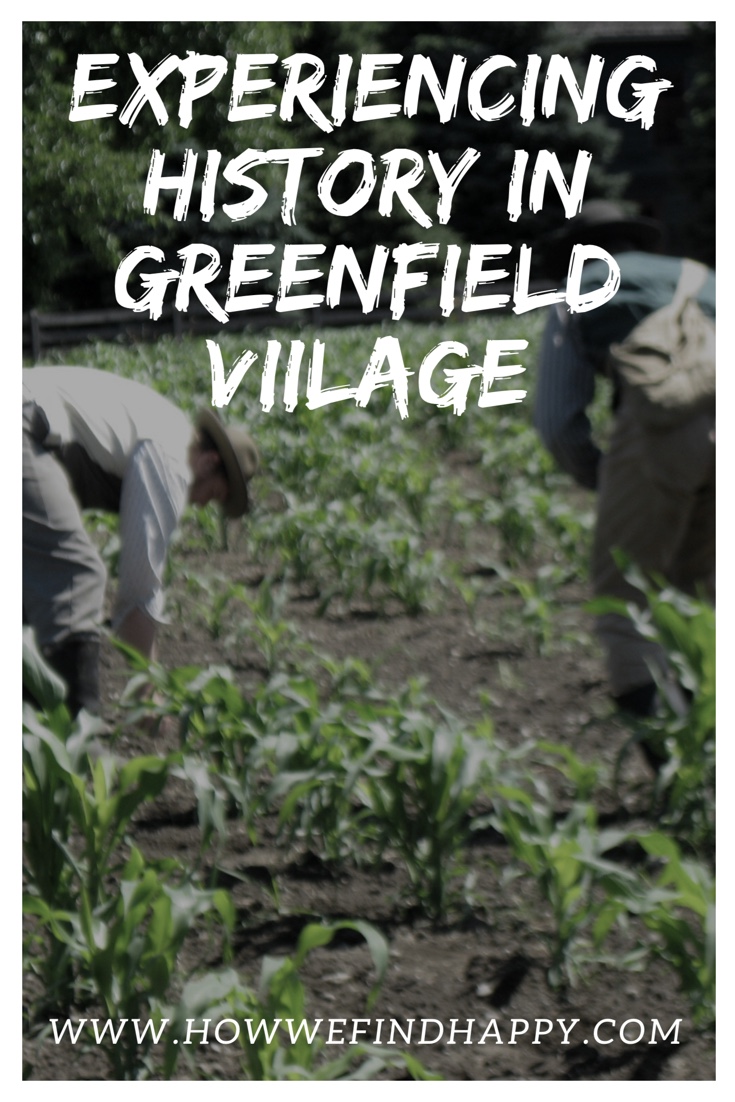 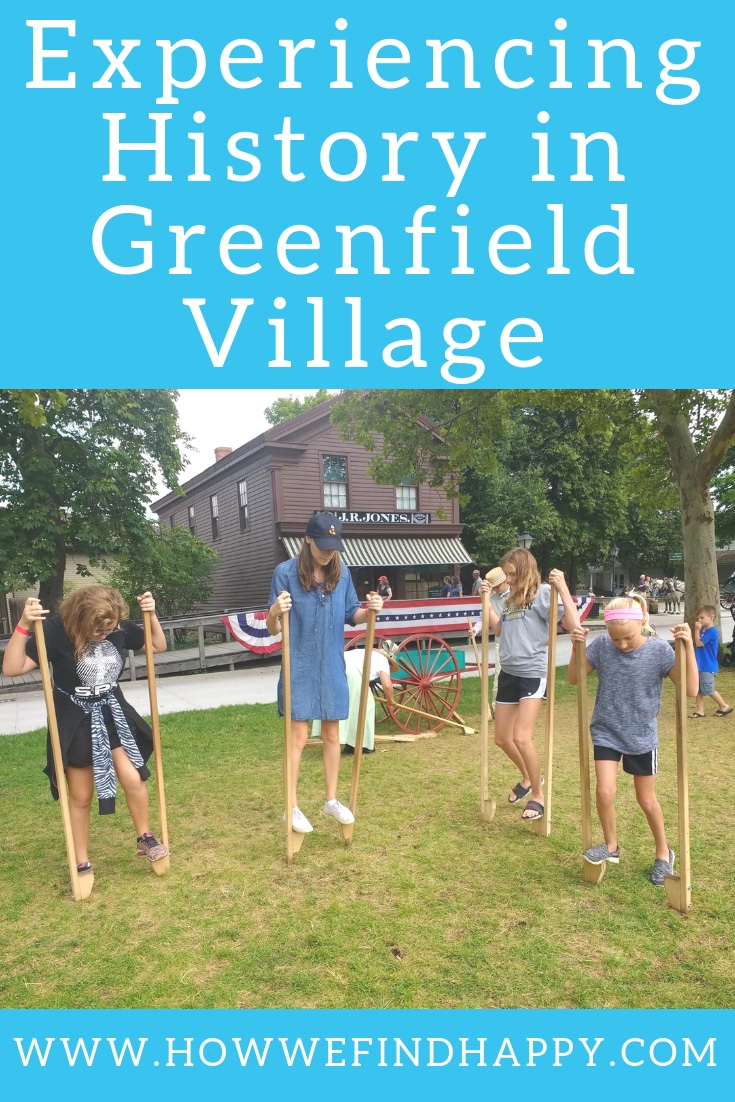 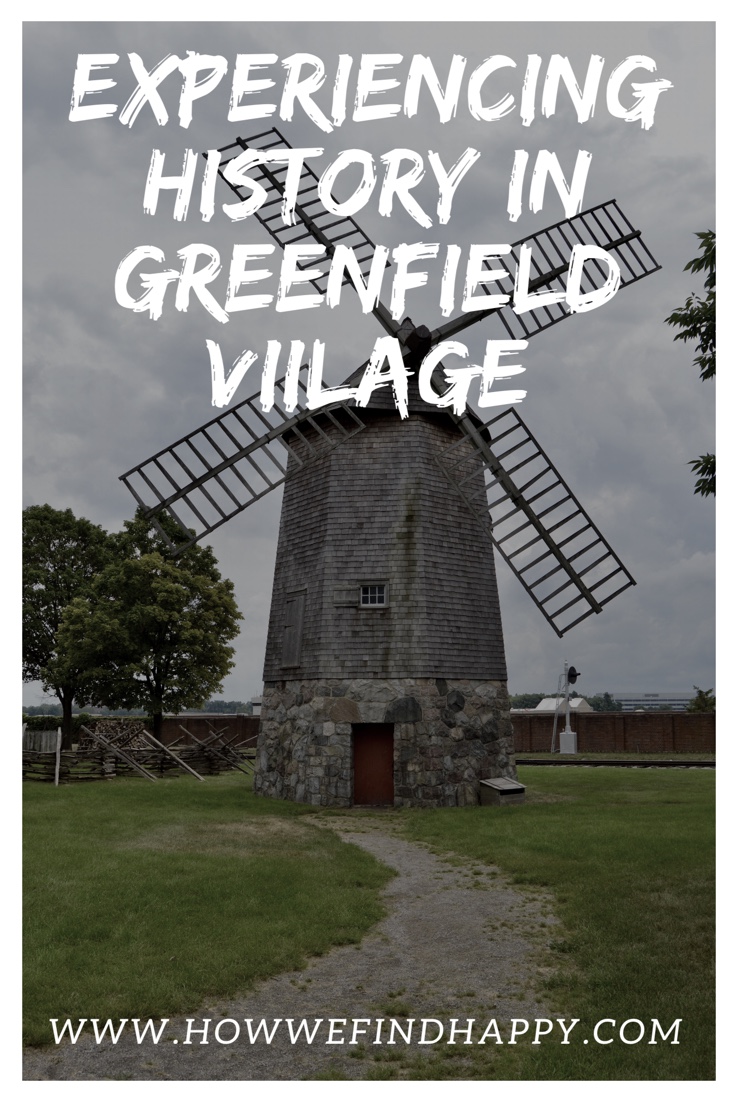 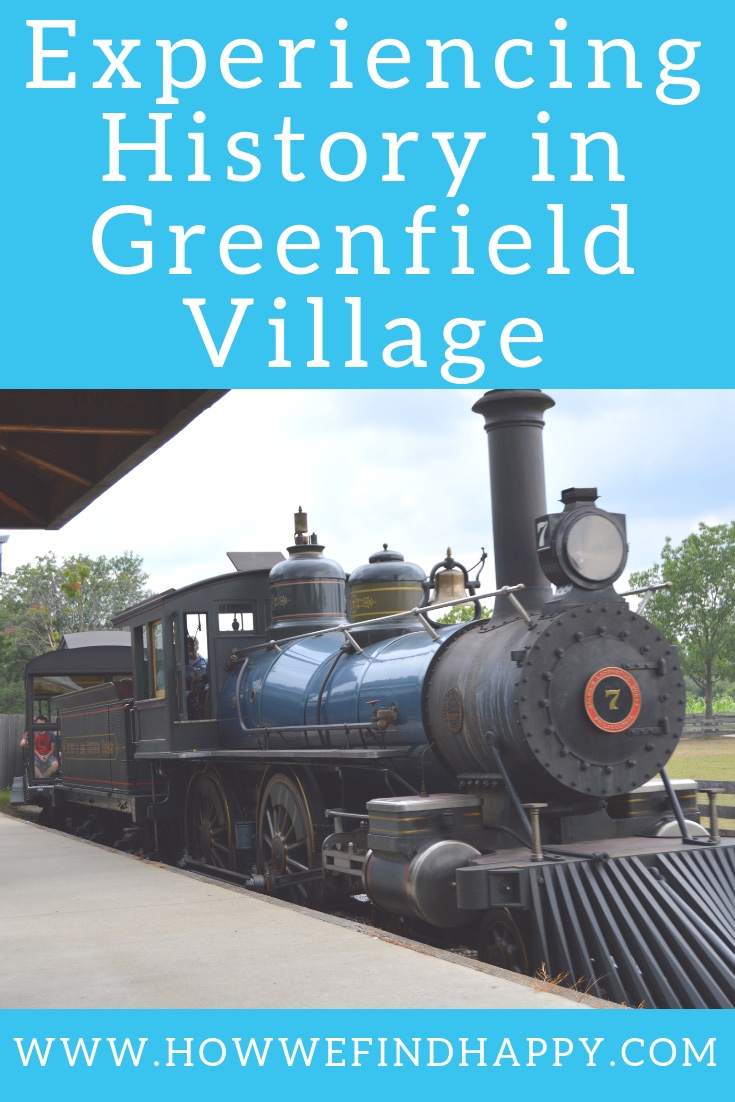 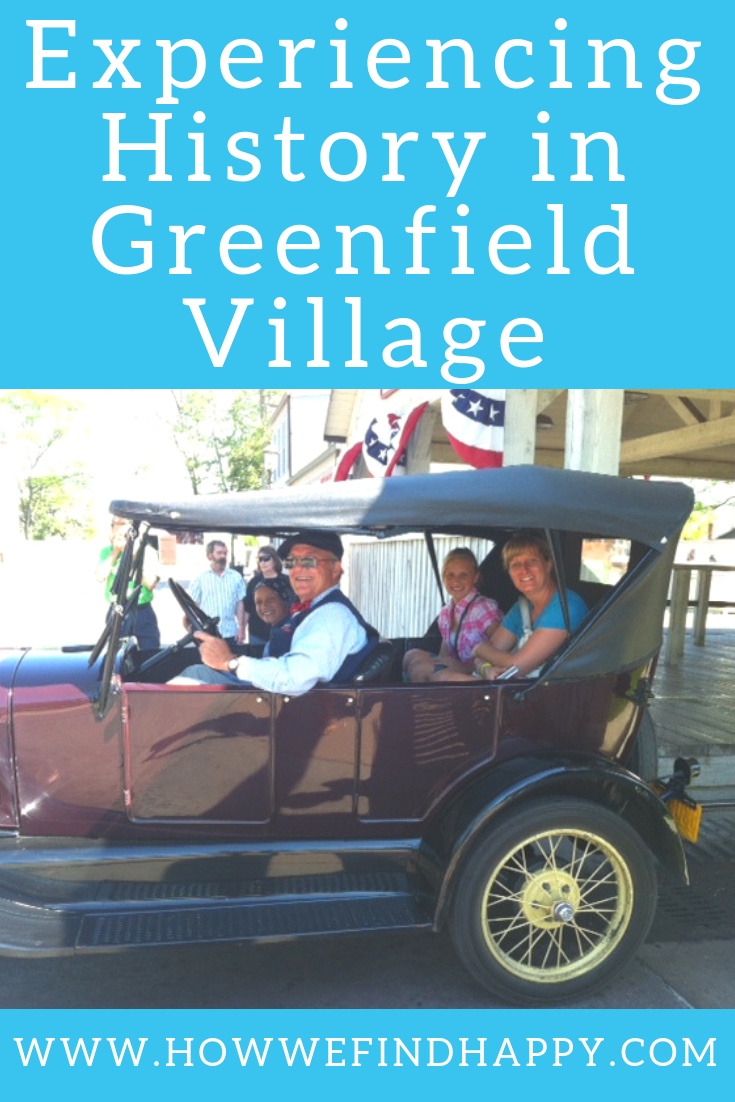 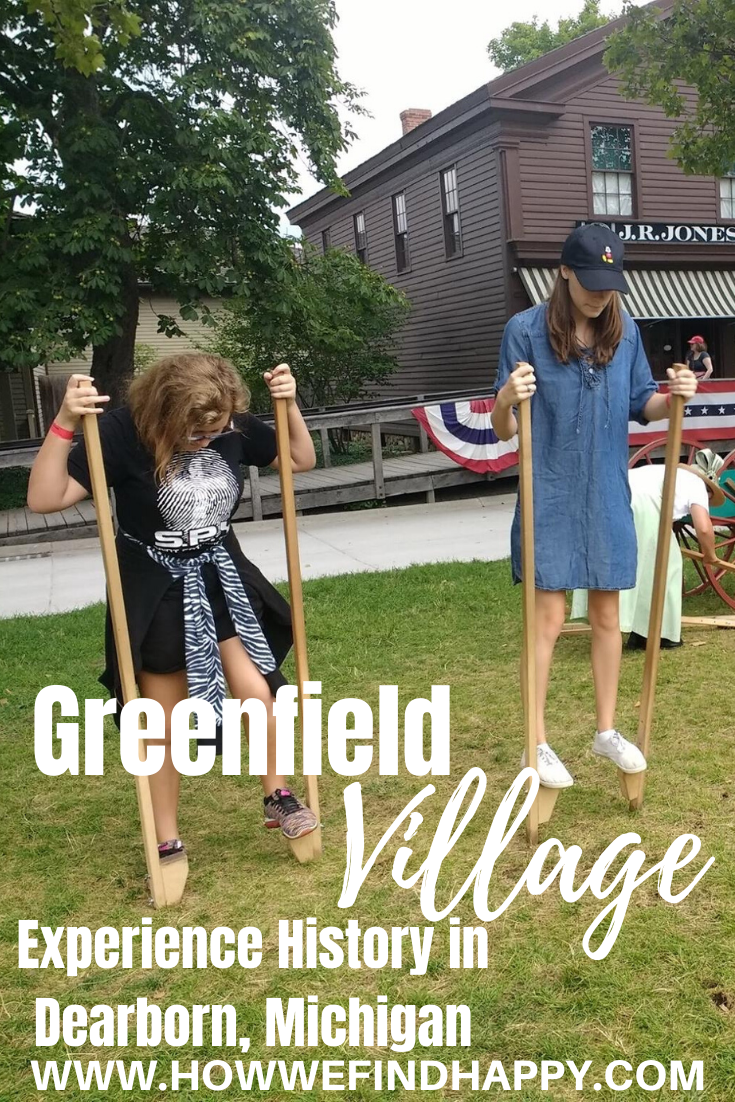 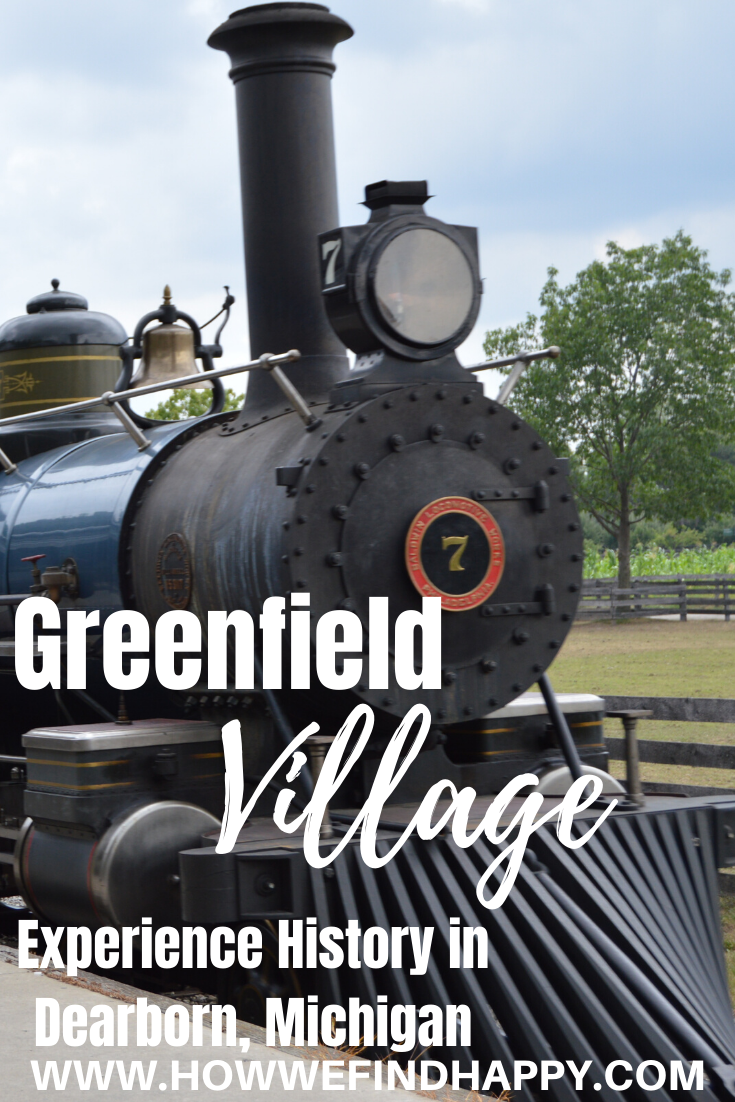 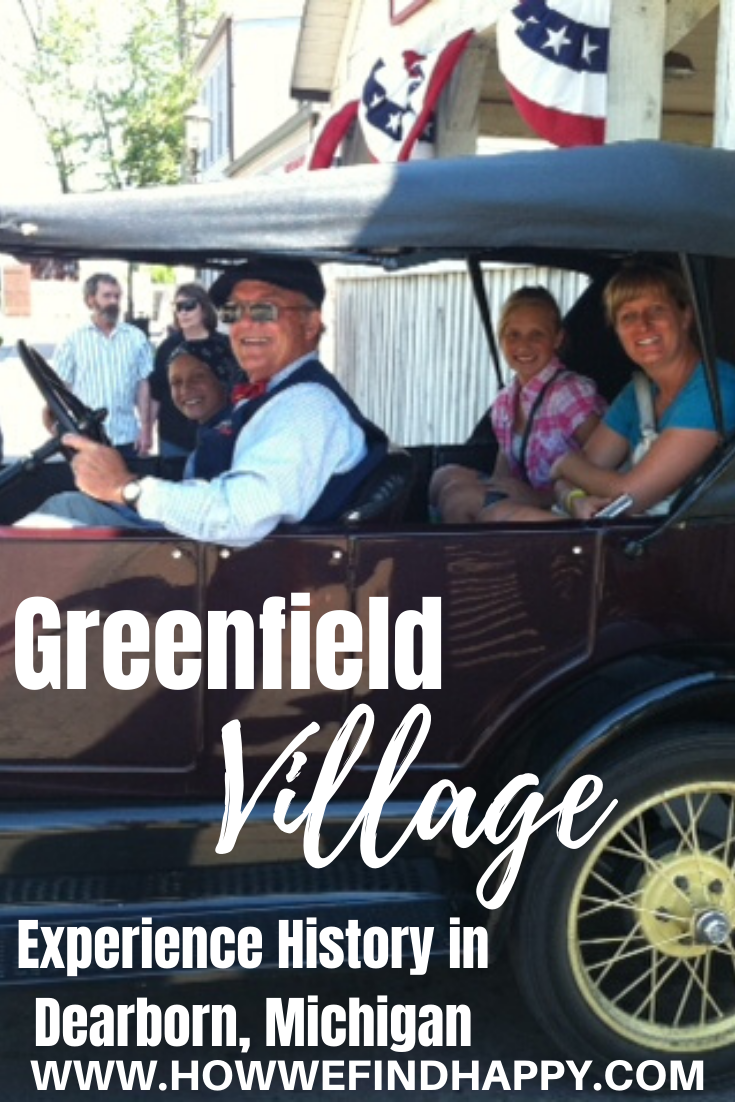 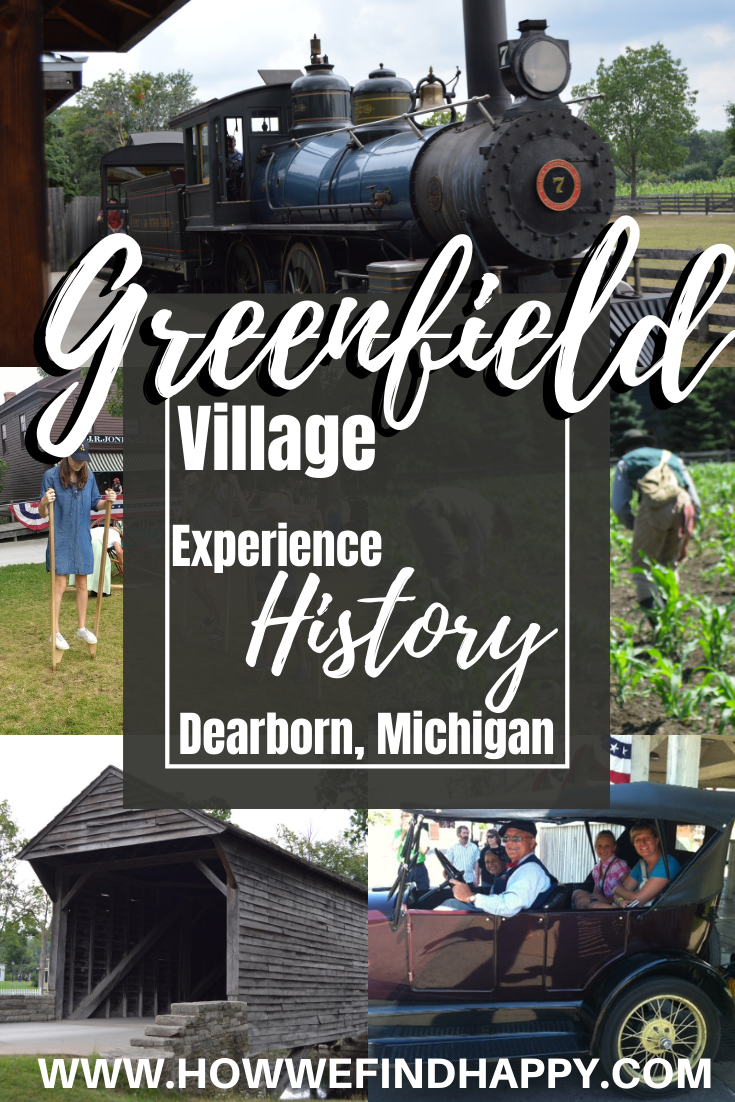 Over 40 years ago, I got to experience history in Henry Ford Greenfield Village for a “day of school” in the Scotch Settlement School House. From that day, I fell in love with hands on historic learning, and visiting historic places and homes.

Greenfield Village is located in Dearborn, Michigan and became a National Landmark in 1987. Dearborn is hometown to the famous Ford Motor Company, and our hometown before moving to Central Florida. We loved living in a city with such deep historic roots in this country. Thankfully Henry Ford saw the importance of preserving history in such a unique way.

“I am collecting the history of our people, as written into things their hands made and used. When we are through, we shall have reproduced American life as lived, and that, is the best way of preserving at least a part of our history and tradition.”

Greenfield Village is an 80 acre sanctuary filled with over 300 years of America’s spirit to make things happen! It also makes it one of the best educational travel destinations. Perfect for traveling homeschoolers. Over many years, and several visits to Greenfield Village, here are some must sees.

Firestone is our favorite of the 6 working farms. Tire maker Harvey Firestone, was raised in this house by his parents Benjamin and Catherine. The fields are re-created from the original 1880’s Firestone Farm.

Home to the nationally renowned collection of agricultural tools and equipment. Henry Ford collected many of the items himself.

Showcases the grain milling processes you walk through,

but it’s a great photo backdrop. Or even pretty on it’s own.

Pottery is made daily to demonstrate the process, but you can also purchase the handmade items.

Just like the pottery, the weaving shop you can watch first hand as they weave items, which you can purchase.

There is also glass blowing, that is so amazing to watch. Sadly I don’t have any pictures from inside the glass blowing shop.

When we last visited in 2018, the carousel was 105 years old!! It was built in 1913 in North Tonawanda, New York. What’s most unique about this Herschell-Spillman made carousel?? Not only is it the only carousel with giant green frogs, but they are the only carousel animals to wear human clothing!!

Take a ride in a Ford Model T. We did this when we visited in 2012. They drive you through the streets of the village. Great way to see more of Greenfield Village too.

The Detroit & Lima Northern Railway takes you around the edges of the village, and even beyond. Above all, you are able to get different views, and give your feet a much needed break.

We’ve never taken a carriage ride. However, I still wanted to mention it. Really not sure why we’ve never done it, so I guess I need to make sure I do next time we visit.

Definitely a must see. I mean, this is the home Henry lived in. Ford grew up in this farmhouse with his parents and 5 siblings. Growing up on a farm, and disliking his chores, he realized farm life was not for him.

A replica of the workshop Ford built for his son Edsel. Inside, you can watch a short movie of inspiring moments from Ford’s life that led him to follow his dream.

This replica building was built in Greenfield Village. However, it is only one-quarter the size of his original building, but still worth peeking at the beginnings of a company that changed our country.

Built in Greenfield Village in 1929, with some of the structures from the original complex. Edison’s lab in Menlo Park, NJ is where he developed the electric lighting system, and many of his other inventions.

On the 50 year anniversary of the light bulb, in 1929, Ford had Edison re-enact the moment. After photographing the memory, Ford insisted they nail the chair to the floor in remembrance of the day. Therefore, this year will mark it’s 90th anniversary.

Ford’s youngest worker, Francis Gale, was still alive when the boarding house was moved to Greenfield Village. Therefore, Francis was able to direct Ford’s people to set the home up just like Francis remembered it. In other words, the furniture looks similar to what Francis remembered, but is not the actual furniture from the home.

Be sure to check out what kinds of fun activities they have in the Village Green, because there are all kinds of fun period time games. This time the girls got to try out their talents with some stilts, and they had fun!!

In addition, the Village Green is also a great area to take your packed lunch, and have a picnic. Although they do have several restaurant options.

This is the school house I attended for my “day of school” at Greenfield Village. I believe I was in 3rd grade. Itwas built in 1861 in the area of Dearborn, Michigan called The Scotch Settlement. Ford attended this one room schoolhouse from around age 8 to 11. He actually restored the school, had it moved to Greenfield Village, and used it as a classroom.

One of my favorites is Dr. Howard’s office, from Tekonsha, Michigan. Can you believe he attended two medical schools, but didn’t graduate?? However, he just returned home, and became a doctor.

Being into natural living, I love how his office shows he made his own syrups and pills from herbs, roots, and barks.

Look at these prices for a doctor’s services!!

This is the favorite of our oldest daughter. She always liked Abe Lincoln, so for her to walk into a courthouse where Lincoln practiced law, was memorable. Built in 1840 in Postville (now Lincoln), Illinois.

Lincoln tried cases here between 1840 and 1847, before being elected president.

This chapel was built in honor of Ford’s mother, Mary, and his Mother-in-law, Martha. Built in the “center of town” just like during Colonial times. In addition to being the focal point of Main Street, and the Village Garden, the chapel is used for actual weddings!

Elizabeth Cohen, a Detroit resident, and young widow, lived above her store. Therefore, being a widow, she was able to take care of her children. In addition, she was able to and work to support them. The girls had fun trying on hats in the shop.

Bridges, like Ackley Covered Bridge, connected busy roads and towns. Wood for this bridge came from the Daniel and Joshua Ackley Farms. Built over Wheeling Creek in West Finley, Pennsylvania in 1832. Another pretty location for taking pictures.

Thought to be the oldest windmill in the United States, Farris Windmill was built in the mid 1600’s. It operated in Cape Cod, Massachusetts and allowed grain farmers to mill different grades of flour.

Built in 1754 in Andover, Connecticut, the farmhouse features the life of bartering. Both Samuel and Anna Daggett did a variety of things.For instance, building houses, making furniture, spinning yarn, making clothing, and teaching their children. In other words, family members acquired many skills in addition to those needed just to survive. This allowed them to trade with others for what they needed.

I just love the Cotswold Cottage, with its beautiful limestone, and flower gardens. It was built in the early 1600’s in Chedworth, Gloucestershire, England. We love taking pictures around this home.

In addition to it being a beautiful place for photos, they also offer tea, pastries, and sandwiches in the garden during selected times.

A special home to me, because when I was in school, I deeply enjoyed poetry. The Road Not Taken had impact on me during my middle school years. Therefore, seeing It framed on a wall, inside his home brings back so many memories!

I can only imagine what it must have been like to be a student at University of Michigan, and be invited to his home to talk poetry.

Luther was a naturalist who experimented with plants, fruits, and vegetables. He developed many new varieties of fruits, vegetables, flowers, trees, grains, and grasses. For instance, his most popular would be the Russet Burbank potato, which is the world’s most cultivated potato.

The girls like going into the house for the dolls. You know we loved the Marvel ones. You can even pay to make your own doll.

Amos and Grace Mattox were descendants of enslaved African-Americans. Their home was built around 1880 in Bryan County, Georgia, by Amos’s father. The land was purchased by his grandfather, Amos Morel. As seen in our video, The Mattox family lined the walls and ceiling with newspaper because it was the best way insulate the home for cool Georgia nights.

“We ought to know more about the families who founded this nation, and how they lived. One way to do that is to reconstruct as nearly as possible the conditions under which they lived.”

I hope you enjoyed a partial walk through Greenfield Village. There is so much more to see, but these are just some of our favorites. Getting to experience history in Greenfield Village as a child is one of the most memorable places for me.

What are some of your most memorable places you visited as a child? A favorite field trip? Your favorite places to experience history? Come share with us on Instagram!!

More things to do in Michigan, Check out: 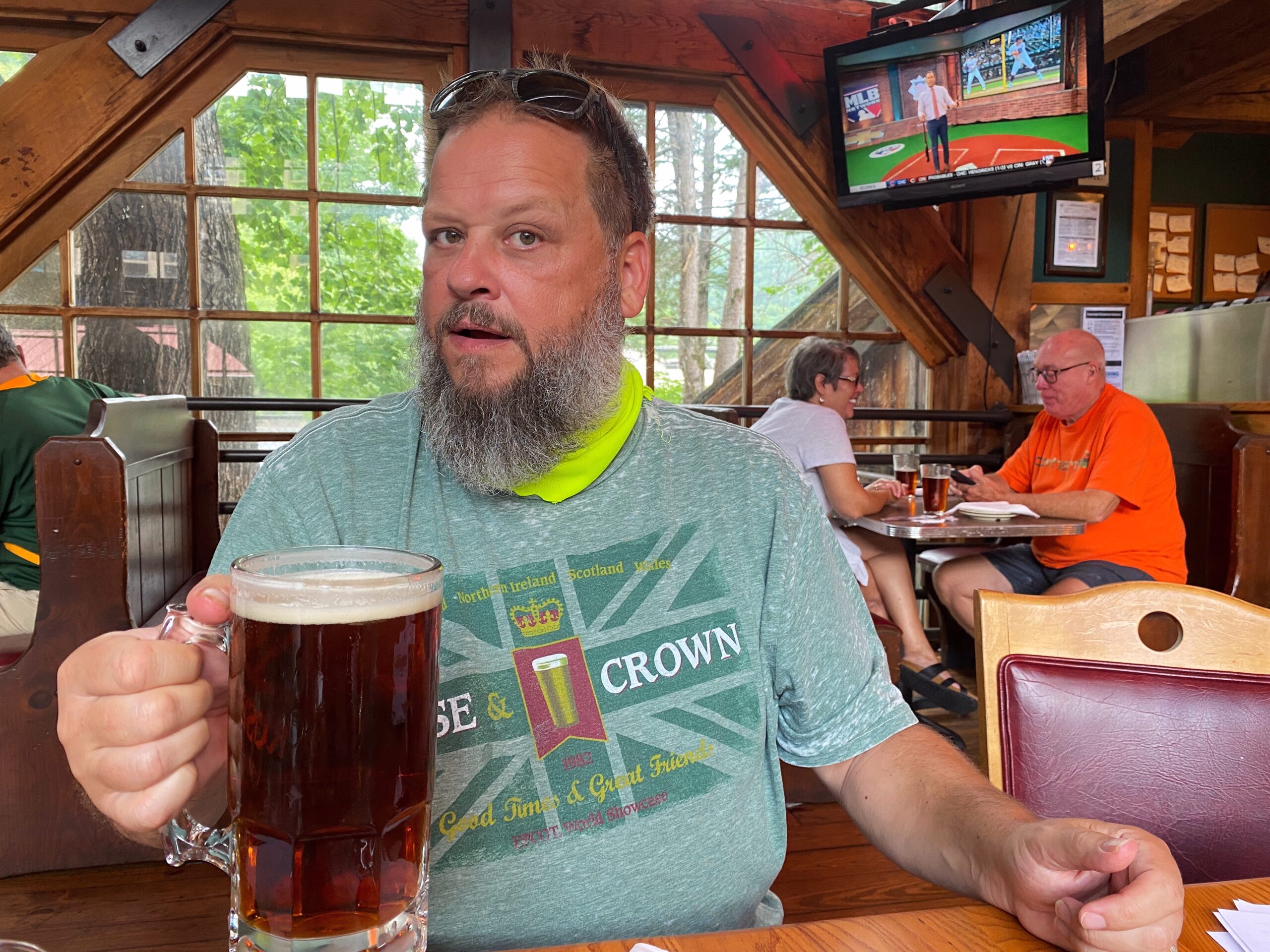 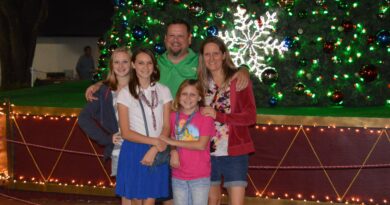 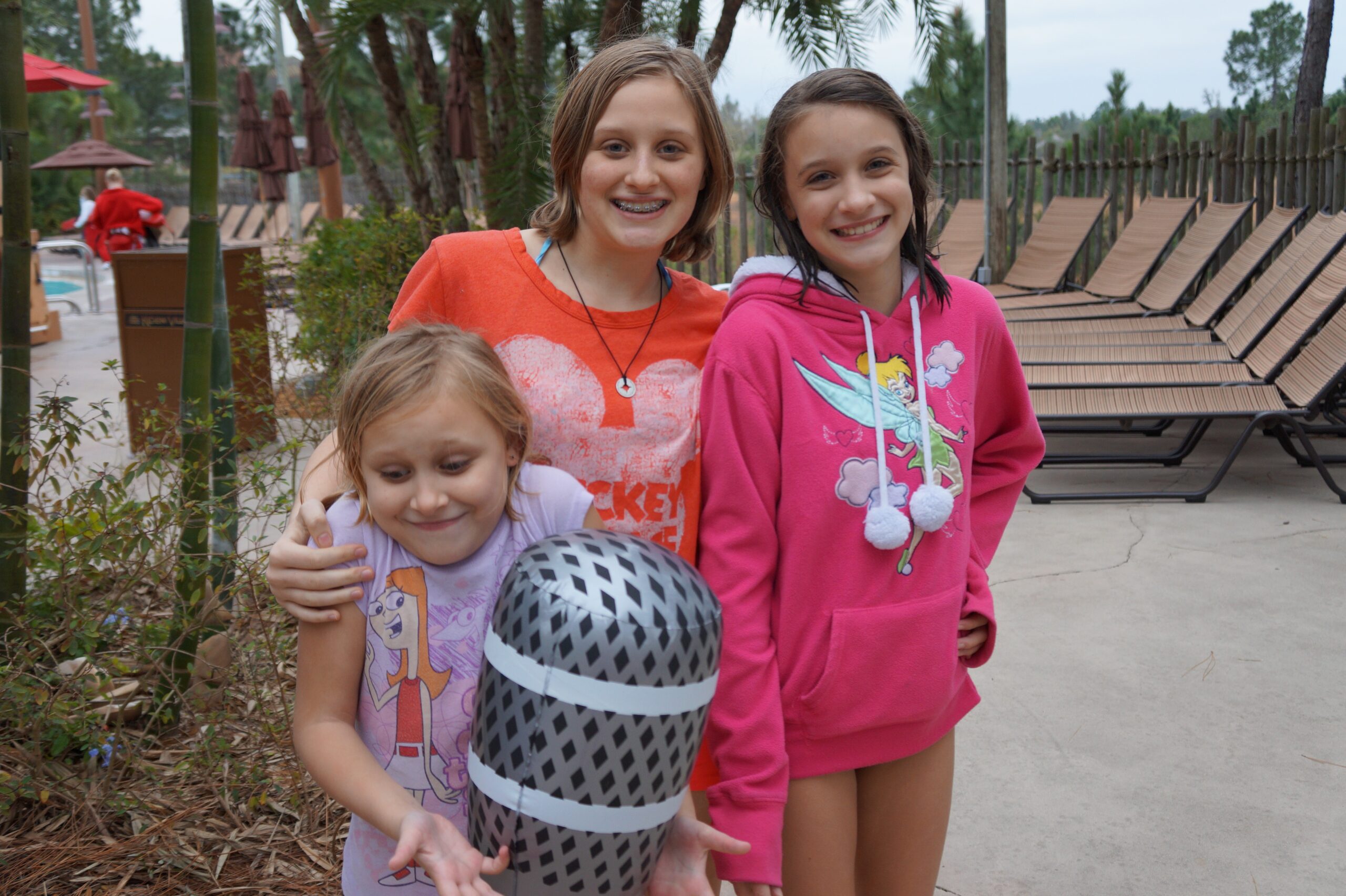 20+ FREE Things to do at Animal Kingdom Lodge