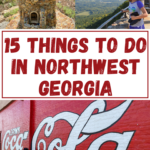 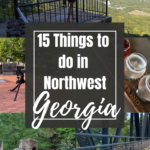 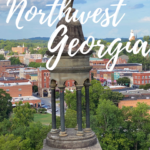 As we made our way southwest from I-75, along GA-151 towards Rome, the scenic drive was beautiful. My eyes were drawn to the small mountain tops right behind homes, and the uncrowded back roads away from any big city. But don’t let that fool you, because there are many things to do in northwest Georgia, despite it being covered in small towns. We wish our stay had been longer, and can’t wait to go back.

First, Why Did We Decide on Northwest Georgia?

Stopping in northwest Georgia was a short drive from our previous stop over in north Tennessee, and brought us a little closer to home. Plus, I’ve been following fellow blogger Erin, over at When in Rome, GA for over 2 years. Her blog is full of details on northwest Georgia’s small towns. Intrigued by her posts, and our desire to visit new, off the beaten path, small towns, it made perfect sense to visit.

Next, Where to Stay in Northwest Georgia?

Wanting to experience the area like a local, we chose to rent a home with Airbnb. This quaint little two bedroom, turn of the century home is completely remodeled, and so cute. Also, located just outside main downtown Rome.

Among many other beautiful old homes, the neighborhood was adorable, clean and safe. Don’t worry if this home isn’t available, because when I was looking for a rental, there were plenty to choose from on Airbnb.

Things to do in Northwest Georgia For All Ages

Rome stands out among the small towns in northwest Georgia because of it’s unique location. Three rivers, the Etowah, Coosa, and Oostanaula come together forming Between the Rivers Historic District, which is on the National Register of Historic Places.

Broad Street is the main road through town, and it’s full of original buildings. Mitchell Plaza is along W 3rd Ave and the Rome Area History Center. You’ll find this fountain, and it’s home to the Register of Historic Places marker.

One of Rome’s most notable landmarks is their clock tower and museum. Nestled atop Neely Hill, you can see it from just about anywhere in Rome. Sadly our short visit did not allow us to visit, but I would love to do this next time. You can read more about the tower history, and museum from Erin, with When in Rome GA.

Take a Walk Along the Rivers

There’s lots of trails along the rivers. One is the Heritage Park Trail, where Lock Bridge crosses just over the end of the Oostanaula River. Have you ever seen a lock bridge? It’s neat to check out all the different locks, and makes for some great photo opportunities.

Myrtle Hill Cemetery is home to one of the most unique, under-rated, patriotic sites we’ve visited. The Grave of Private Charles Graves, Tomb of the “Known” Soldier.

In 1918 Charles was killed, and originally buried in France during World War I. His body was brought back to the US on March 29, 1922, and chosen to be buried next to the Tomb of the Unknown Soldier in Arlington Cemetery. Charles’ flag covered coffin was paraded in New York along with generals, admirals, and politicians before his mother refused to let him be buried in Arlington. Instead, she chose to have him buried near family in Rome, Georgia.

The following year, after his mother’s death, his brother agreed to have Charles moved to Myrtle Hill Cemetery when local citizens decided he should be buried in a place of honor. Charles has since remained in Myrtle Hill Cemetery, guarded by bronze machine guns, and is the center of Veteran’s Walkway.

Be sure to either walk or drive to the top of Myrtle Hill Cemetery, because you do not want to miss this view of Rome.

Where to Eat in Rome

If you’re a BBQ loving family like we are, then you’ll love Moe’s. Plus it’s located right by the Lock Bridge. After dinner, you can take a walk to the bridge, or around town.

We were very sad to hear about the closing of Crawdaddy’s. Matt gets all the credit for finding Crawdaddy’s. None of us were sure what we were in the mood to eat, but boy did this hit the spot. Louisiana cajun and creole cuisine fills the menu. In full Louisiana style, they also had my favorite beer from Abita Brewing, a Louisiana brewery.

I had the shrimp & crawfish étouffée, and it was by far one of the best seafood meals I’ve ever had. We all agreed we’d go back to visit Rome, just to eat here. All the desserts were to die for, so be sure to save room.

The Rock Garden in Northwest Georgia is a Must See

Thanks to Roadside America, we found The Rock Garden. Located just outside of downtown Calhoun, you can make a stop on your way or out of town.

Filled with over 50 miniature well known buildings, built out of rocks, pebbles, shells, broken glass, and more. At the entrance to the garden, grab a guide map. This will tell you what all the all displays are as you walk the trail.  In addition to building displays, there’s a walking trail, picnic tables to bring lunch, and benches to take time to reflect.

Where to Eat in Calhoun

Whatever you decide to do around the Calhoun area, consider Trackside Pizza for lunch or dinner. We ordered takeout so we could eat at Freight & Rail Brewing, and their pizza hit the spot. So cheesy, just the way we like it on a meatlovers.

Found on the side of Youngs Brothers Pharmacy, this Coca-Cola sign was first painted in 1894. Although it changed over the years, in 1994 the wall was restored to its original look.

A Popular Thing to do in Northwest Georgia, Lookout Mountain, See Rock City, and Ruby Falls

Lookout Mountain is on the border of northwest Georgia and Tennessee, and crosses over into both states. We didn’t visit during our most recent trip, but we did stop a couple years ago.

We made our way up to Lookout Mountain through Chattanooga, but you can also get there through Georgia. So, it makes a great day trip.

See Rock City is a true gem of nature with winding paths through majestic trees, gardens, and rock formations. Widely known for their “See 7 States” overlook, and See Rock City below.

In addition to visiting Rock City, you can purchase multi-tickets for both Rock City and Ruby Falls. Just a couple miles away, over the border into Tennessee, is Ruby Falls, an underground cave waterfall. We were able to do both the day we stopped. I honestly had no idea Ruby Falls was so far underground in Lookout Mountain, but it was something my girls still talk about.

Things to do in Northwest Georgia For Adults

Let’s not leave out the adults when visiting northwest Georgia. In this little corner of Georgia, west of I-75, and north of I-20, there are three breweries. They’re all pretty close together, so easy to check them all out.

First we visited Freight & Rail Brewing Company in downtown Calhoun. Sadly, after being shutdown for too long, they had to close. Such a shame, because we really enjoyed this brewery.

Historic downtown Cartersville is home to Drowned Valley Brewing Company. Although listed under adult things to do, we had our two teenage daughters with us. They offer several games, such as cornhole, shuffle ball, and a new to us game called Sapo.

Sapo is a Peruvian game, and we had a lot of laughs attempting to perfect this game. If you want to play Sapo, you have to get the coins from the beertender, because they only have one set.

Drowned Valley Brewing hosts food trucks out front, and we were lucky enough to try Let’s Taco ‘Bout It Food Truck. Serving a mix of authentic and fusion tacos, there’s plenty to choose from. They also serve rice bowls, and nachos.

Another closed business due to shutdowns. Found in the heart of Between the Rivers Historic District, Rome City Brewing is right on Broad St. A beautifully restored and maintained building, but we were only able to see the second floor due to closure of the main floor. Loved the atmosphere, and could imagine spending lots of time here if we lived in the area. While sipping on our flights, Matt found previously mentioned Crawdaddy for dinner.

Just a couple streets away from the Airbnb we stayed in, we had driven past The Foundry a couple times. But, it wasn’t until after the beertender from Freight & Rail Brewing told us to go there, that we decided to stop.

A craft beer heaven for those looking for a wider variety of brews on tap, bottled, or even canned. Not only can you get growlers filled, but they also carry both cold and warm beer, cider, seltzer, and more. You can mix and match, and purchase individually. Best part, there’s not a huge uncharge, which means you can get most bottles and cans for $2.00 each. Wish there were more places like this.

Final Thoughts on Our Visit to Northwest Georgia

Three nights is not nearly enough time in northwest Georgia, but we enjoyed all the places we got to see, and things we got to do. There are so many more historic places in the area I would love to visit, but we were there in late July, and it was very hot still. A visit in spring or fall would be ideal. You can use both Georgia High Country and Roadside America to help plan your own trip.

Our yearly summer road trips from Florida to Michigan have allowed us the chance to see many places along the I-75 highway. We would love to hear about your favorite stops along the way. For more on Georgia, check out our stay in middle Georgia on Lake Sinclair, just east of Macon. 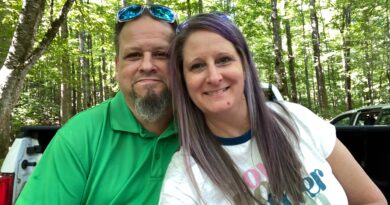 Gatlinburg for Couples and Adults 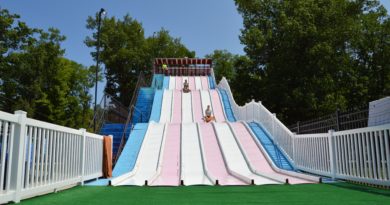 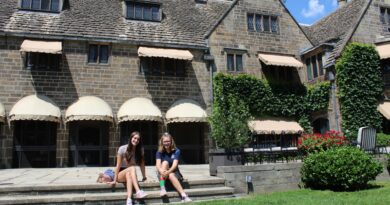 13 thoughts on “15 Things To Do In Northwest Georgia: Small Towns, History, Eats, and Breweries”